On Jan. 6th, 2021, angry supporters of President Donald Trump stormed the Washington DC Capitol in frustration with Joe Biden’s Electoral College victory. Protesters fought past police forces and breached the house, waving American flags as they marched through the hallways

Much was said about the fact that these actions threaten the core of our democracy and undermine the rule of law.

The treatment of the group at the Capitol by law enforcement has been deemed by many Americans as the ultimate statement of white privilege as it compares to the heavy-handed approach employed on peaceful protests over racial justice last year.

But what is white privilege and how does the incident at the capital exemplify this?

According to Dictionary.com , White privilege is defined as the inadvertent, unearned social advantage white individuals have over other racial groups simply because of their skin color.

Kaysha Florvil, a freshman business major at FAU, says that an example of white privilege is “being able to go into a store without being followed, interrogated or searched by law enforcement because you look ‘suspicious.’” She said she has personally experienced this situation at the Town Center in Boca when she was simply just “trying to shop peacefully.”

But is white privilege real? Or is it all just coincidental?

Beverly Tatum, author of the best selling novel “Why Are All the Black Kids Sitting Together in the Cafeteria? And Other Conversations about Race” says that “the privileges afforded to whiteness are so much a part of the structure of U.S. society that many white people don’t even notice them.” There are some simple, everyday conveniences that white people aren’t forced to think about, such as having “flesh-colored” Band-Aids that only match their skin tone or going into a grocery store and finding most food options that reflect the white cultural norm instead of being displayed as “ethnic foods.” Though these privileges are mostly unnoticed, it is important to recognize them because they are unfortunately symbolic of the cultural “standard” in America.

White individuals are able to move through society knowing that their expectations and needs will be readily met the majority of the time. People of color move through the world knowing their needs are on the edge.

And these instances can go beyond grocery stores and Band-Aids. For example, according to  Harvard T.H. Chan School of Public Health, over the last decade, black people were up to six times more likely to be stopped by the police than their white counterparts. Black people are also 10 times more likely to be stopped and searched by police. This suggests that white individuals are more likely to receive compassion from law enforcement, to be granted individual potential, and  to survive mistakes.

Many times the word “privilege,”  especially for white people who live in rural communities, sounds like a word that suggests they have never struggled before.

White privilege is not the suggestion that white people have never struggled.

One might also believe that the word assumes that everything a white person has accomplished did not require any effort or hard work.

I wholeheartedly believe that the majority of white people who have reached a high level of success have worked hard to get there.

However, the color of their skin is not a factor that will influence how well they succeed, how they are perceived, and what they are able to get away with it.

For example, the incident at the capital two weeks ago.

Back in June, when the Black Lives Matter protests took place after George Floyd’s murder, black protestors were tear gassed, flashed with rubber bullets, and met with military force. Many sustained serious injuries. Protesters were named “rioters” and depicted by many as anarchists looking to cause mayhem, though they were just protesting for equal human rights.

In contrast, a white mob was allowed to ransack the Capitol two weeks ago.  Most who entered the building were allowed to leave when they chose to do so. Reportedly, 26 were arrested on Capitol grounds out of the hundreds that stormed them. Some even went as far as taking selfies with the police (Washington Post).

Truly, the differing treatment exemplifies how white privilege is a legacy of racial injustice and racial disparity ingrained into our American system.

Michaela Bernard, a freshman Psychology major at FAU says, “The events at the Capitol exemplified privilege because they had the ability to make it inside the building before being stopped. Meanwhile, during our peaceful protests, there was no hesitation to literally take us down.”

Simply, white privilege is being able to choose where and when you take a stand without considering the consequences.

These scenarios have negative effects for people of color who, without these privileges, will face the consequences of stereotypes, lack of compassion, racial disparities and much more. However, I would like to emphasize that having white privilege and being able to recognize it is not racist. It is important to use your privilege to amplify marginalized voices, educate others, and most importantly, listen. 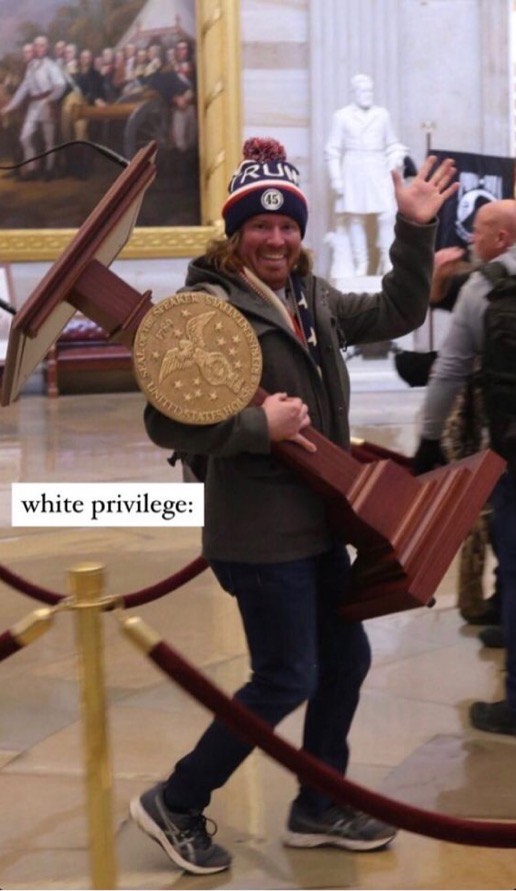