The quarterback is often considered the most important player on the team. They are usually the leader of the team, and whether they succeed or fail can have a vital influence on their team’s fortunes. Accordingly, the quarterback is typically the most popular and lucrative position in football.

While glorified and revered, a team’s quarterback play is always under a microscope but there is a subcategory of quarterback that is arguably the most scrutinized: the black quarterback.

In 1920, Fritz Pollard became the first black quarterback in the history of the National Football League. Walter Camp, known by many as the “Father of American Football”, once stated that Pollard was “one of the greatest runners these eyes have ever seen.”

Pollard’s time in the NFL was cut short though as he and nine other black players were eventually banned from the NFL as the league became racially segregated.

While the praise from Camp was warranted, there is an issue with his statement that is now a focal point in modern-day and that is that, while true of Pollard, he was merely a runner.

Black quarterbacks face stereotypes that liken them more to an athlete than an actual football player which means that black quarterbacks, while extremely athletic, lack the intelligence and fundamentals to play the quarterback position.

That is a stereotype that extends beyond football and into American culture. Black people used to be incorrectly seen as intellectually inferior to white people but that was due to biased scientific research and not an accurate analysis of the poor socioeconomic climate that African-Americans lived in at the time.

Those stereotypes still afflict many black football players who are encouraged from a young age to play running back or wide receiver instead of a quarterback. 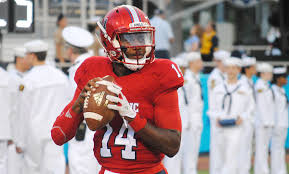 Marlin Briscoe is considered the first black quarterback to start a game in the modern NFL and in his rookie year he threw 14 touchdown passes and was a candidate for Rookie of the Year.

After the season, Briscoe was released after it became clear to him that he would not play quarterback again and was later converted to wide receiver by future teams.

While still in college, quarterback Lamar Jackson received endless praise for his blazing speed and athleticism but many scouts, draft experts, and front office personnel thought it would be best for Jackson to switch to receiver even though he broke numerous records and won the Heisman Trophy as a quarterback.

Jackson remained adamant that he wanted to play quarterback in the NFL and in 2019, Jackson broke the record for the most rushing yards in a season by a quarterback and led the league with 36 touchdown passes. Jackson was named the NFL Most Valuable Player, becoming only the second-ever unanimous selection for the award.

Jackson became one of the four African-American quarterbacks to win the NFL MVP award.

Black quarterbacks once seen as a rarity in the NFL have seen a surge in their numbers in recent years but still remain a minority in a league where black players, in general, are the majority.

Trey Avant is a contributing writer for the Paradigm Press. For information regarding this or other stories, email treyavant3@gmail.com or tweet him @TreyAvant3.